After an absence from the market for a little while, “Kaloam” cricket loam is now back and available to purchase.

Boughton Loam have just acquired the rights to produce and sell “Kaloam” and are now ready to re-launch the product to a ready, willing and demanding clientele. “Kaloam” from Boughton Loam will be an important component in the preparation of next year’s wicket. 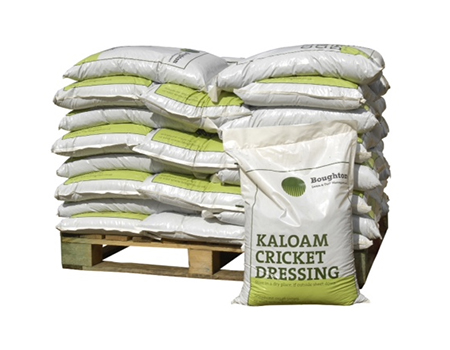 “Kaloam” has for a long time been the preferred choice of many a cricket club and many a cricket groundsman. Its familiar light brown colour distinguishes it from other cricket loams and its high clay content gives the wicket its feel and character when played and its durability to be able to withstand the punishment of a hard season at the crease.

Every cricket wicket has a unique feels to it, or so the seasoned club cricketer will tell you. It’s almost as if it has its own DNA. The choice of cricket loam used in its maintenance especially at the end of the season forms part of that DNA. That’s why many clubs and groundsmen will not change materials. It’s almost as if to change the cricket loam would bring bad luck for next season when as you know – next season is going to be better.

“Kaloam” has for many years been an alternative for Boughton’s own cricket loam product range. Knowing what a good product this was the strategy was to acquire t

I arranged the purchase and delivery of significant quantities of Kaloam top dressing end of season 2012 for the members of our Cricket Groundsman Association. Members were particularly pleased with what proved to be a premium product of consistent quality. This was good news for the users of Kaloam who had experienced very serious issues of poor quality product from other suppliers in previous years

We have been using Kaloam on our square for over 20 years now. Since moving to Boughton Kaloam two years ago, we have noticed a distinct improvement in the quality of the supplied loam, mainly less moisture content and improved particle screening. This makes the loam much easier to work something that is essential when using a heavy clay loam.

Boughton Loam dressings are guaranteed dry to enable easy spreading either by hand or through mechanical spreaders.

Boughton Loams are sterilised to stop the importation of weed seeds and soil-borne fungi which can develop into fairy rings.

Whether constructing or reconstructing a cricket square, Boughton Loam can be supplied loose in tipper lorries or bagged-in-bulk (builders) bags and delivered throughout the UK.

How Much Cricket Loam Do you Need?

Get in touch to discuss any requirements

The APL Awards are back to taking place in...

We are excited to announce that Boughton have opened...

Part of The Bennie Group
A family of great companies